The font that is used in the logo for the tv series The Fresh Prince of Bel-Air is a typeface that is very similar to FTF Indonesiana Go Graffitiana. The original font is actually a custom hand-drawn logo and is therefore not a font as such. We can see that it is a custom logo design when you look at the letter “r” and notice that they are in fact different in the words “fresh” and “prince”. The words in the logo “the” and “of Bel-Air” use a standard Times New Roman font.

FTF Indonesiana Go Graffitiana is an excellent alternative for those looking for a font that closely reflects the original logo. This particular typeface was designed and created by Fizzetica Foundry in January 2005. It features rough, angular strokes that are synonymous with the young urban graffiti style that was portrayed by the lead character in the tv series itself. Listed below we present a preview of what it will look like when installed on your Mac or PC computer system: 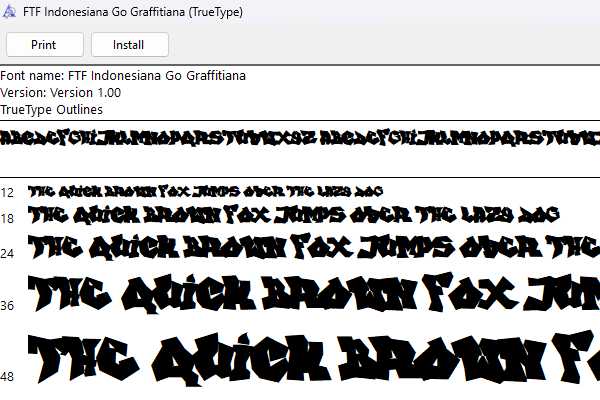 About The Fresh Prince of Bel-Air tv show and logo

1990 saw the first release of the American comedy sitcom everyone knows, the Fresh Prince of Bel-Air. The sitcom is made up of 6 seasons and 148 episodes. The show relates the life of Will Smith as a fictionalized version of himself living in the Bel-Air mansion with his upper-class relatives after being kicked out of his house in West Philadelphia. The sitcom won its first award in 1994 at the ASCAP Film and Television Music Awards for Top TV and went on to win 7 more awards after that.

Create your very own Fresh Prince inspired logo that you can use in posters, t-shirts, school projects, web design, and more. Simply use our Fresh Prince Font Generator tool below - select a font, color, size and custom text ... then hit the Generate button to get your image. From there, Right Click on the image to download and use it. Too easy!