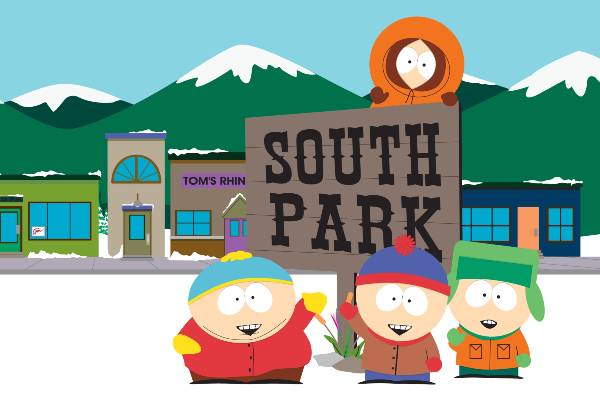 Listed below is the official font that is used in the South Park animated tv series.

About the South Park typeface

South Park is a cartoon TV series that makes Family Guy look family-friendly! Created by Trey Parker and Matt Stone, South Park has been pushing societal boundaries since its first episode aired back in 1997. The show is based around the lives of multiple school kids, primarily Eric Cartman, Kenny McCormick, Stan Marsh, and Kyle Broflovski. Each episode does an excellent job at taking real-world events and exaggerating them to the extreme! Over the years, South Parkâ€™s creators have released 25 seasons! Due to the crude and on-the-nose nature of this program, several episodes have been banned. Although, this only helped to boost interest in the show!

The South Park font is now widely recognized and associated with pushing boundaries. This purposefully uneven typeface is bold and unapologetic. Itâ€™s a similar style to the classic western look. Itâ€™s made to look both tidy and stretched at the same time, this really makes it stand out. Thanks to the success of the show, South Park has released video games, toys, clothes, and pretty much everything else you can imagine! Over the years, South Park has caused outrage among various communities. But every negative thing said about South Park just sparks further interest, itâ€™s a very clever advertisement system!

Use our free South Park font generator tool below to create your own custom design logo or image. Enter your text, select a font, choose a font size, and pick your favorite colors. Hit the Generate button and your logo/image is created and ready to download.