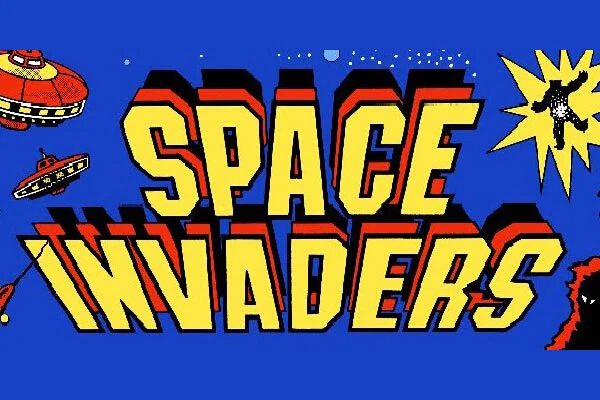 Here you have the Space Invaders font! This is perhaps the most well-known and iconic gaming fonts of all time. The Space Invaders video-game was created by the Japanese inventor Tomohiro Nishikad in 1978. It was initially released in Japan by the Taito Corporation, whilst in the United States it was released by the Bally Midway Corp.

This font that was used in the official Space Invaders logo is a typeface by the name of Machine Std. This comes with a Freeware font license. For all commercial usages you will need to obtain a license from the original font distributer.

The download file contains x2 variations of the Machine Std font, these are MachineStd-Medium.ttf and MachineStd-Bold.ttf. You can experiment with each of these to replicate the exact look and feel of the original logo used in this iconic 70’s video game. Also included in the download file is a related Pixel font which nicely goes with the gaming lettering used in this era.

Space Invaders by Taito is a 1978 arcade game widely considered a pioneer in modern gaming. Designed by Tomohiro Nishikado, the game objective is to fend off swarms of aliens invaders before they hit the ground. A laser guided missile launcher can be panned across the bottom of the screen to battle them. The game was a big hit, grossing over $3.8 billion in 1982. It was recognized as the highest-grossing video game of all time. Aside from its commercial success, Space Invaders is also noted for its influence on gaming and pop culture.

Now you too can create your own 70's / 80's inspired gaming logo design using our Space Invaders font generator app below. Simply select your desired font, choose a color, and hit the Generate button.