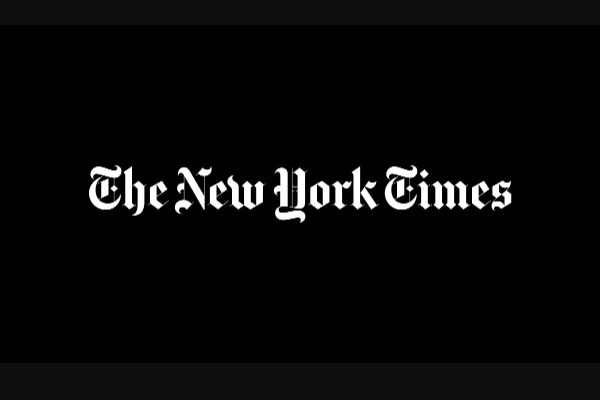 The name of the font that most closely looks like the one used in The New York Times logo text is a typeface by the name of Chomsky. This particular font was created by Fredrick R. Brennan and first released to the general public on 26 February 2007. It comes with a Open Font License (OFL) which states it’s objectives as being to stimulate worldwide development of collaborative font projects.

It is a very close replica to the original lettering used in the main headline of The New York Times newspaper. It comes in TTF file format, which allows for compatibility across both PC and Mac computers.

This is a free font for both commercial and personal uses. You can get your copy below.

About The New York Times logo

The New York Times is a daily American newspaper that’s reader base has stretched much further than New York city as it boasts more than 5,496,000 news subscribers. The paper was founded in 1851 under the name New-York Daily Times by Henry Jarvis Raymond and George Jones. Since its founding, the paper has won 130 Pulitzer Prizes, more than any other newspaper. The paper is available in apps and podcasts and is also translated into Spanish and Chinese.

Now you too can recreate a design that looks just like the lettering used in the original New York Times logo. Using our tool below, you simply enter your text, choose your size and colors, and then select the Generate button. From there you'll instantly have your custom image generated that you can download (Right Click on the image and select Save As) and use in your own design projects or website.