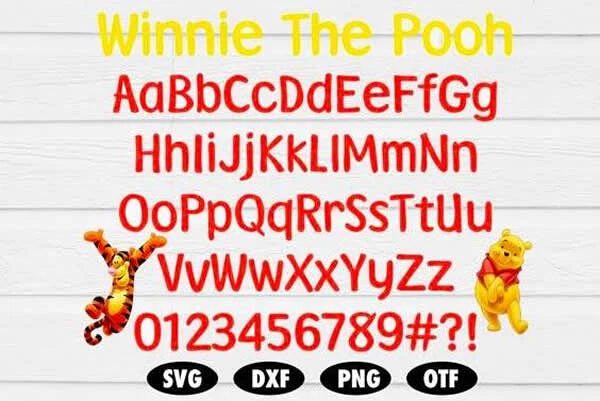 The font that is used in the Winnie The Pooh logo is a typeface by the name of Pooh. This font mirrors almost exactly the same one that was created by A. A. Milne who was the author of the Pooh Bear series of childrens books. If you want to recreate the same whimsical and playful font design that is synonomous with the Pooh character, and one that even Christopher Robin would be proud of, then this is typeface for you.

This cool font comes with a license that is Shareware, which means that you can use this Pooh font free for any non-commercial purpose that you like. This is a sans-serif style typeface which is true to the original design. It comes in TTF font file format, which means that it is compatible with all modern design software (photoshop, illustrator etc). The following is a preview image of all of the elements that come included with the Pooh font – i.e. a full set of Uppercase, Lowercase, Numbers, and Special Characters glyphs. 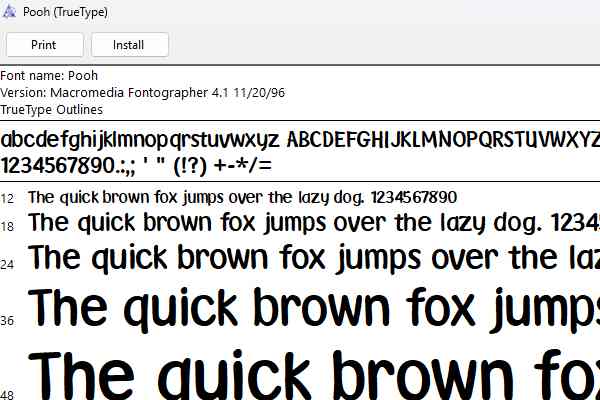 All about Winnie The Pooh lettering

When British playwright A. A. Milne first came up with a book based on his son and his favourite toys in 1926 little did he know that he was about to create one of the most widely recognizable characters even now -almost- a century later. Many books, films, and shows followed them all around The Hundred Acres Wood where Gullible Winnie, Curious Christopher, ever worrisome Piglet, Eyeore, Kanga, and Roo, impulsive Tigger, flighty Rabbit, and haughty Owl all live -so lovingly in our imaginations- and have various adventures that fans are still theorizing about till this day.

An alternative to downloading and installing the above Pooh TTF font is to use our free Winnie The Pooh text tool below. It's free and easy to use. Just enter your text, select your color options, and then smash that Generate button. Voila! You Pooh Bear inspired image is created and ready for you to download and use in logos for your winnie the pooh babyshower invitations, drawings, wallpaper, and even in a winnie the pooh tattoo!